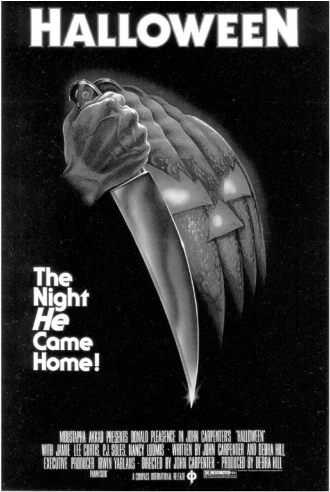 The kids don their white bed sheets. The pumpkins morph into Jack-o’-lanterns with the flick of a lighter. The candy bowl is on the porch, and the arbitrary “only take one” sign is ducktaped to the door. A creepy, maniacal aura fills the air. There are ghouls and mummies and goblins and a helluva lot of “Frozen” costumes. It’s the zaniest, most exhilarating night of the year: welcome to Halloween.

The sun sets, and the hordes descend to trick or (primarily) treat.

No, you decided that the annual spook-fest would go on without you this year. The couch looks extra inviting, and a personal bowl of candy corn is awaiting your arrival. This year, you’ll stay in and watch a movie. Not just any movie; it is Halloween, after all. But which to watch? A slasher? Twisted comedy? Family adventure? Here are a few great choices; some trick, and some treat.

Where else to start than with the namesake of the holiday itself: the 1978 horror classic “Halloween,” directed and eerily scored by John Carpenter. Arguably one of the scariest movies of all time, it stars a young Jamie Lee Curtis in her first feature film and Donald Pleasence as the psychologist of the iconic Michael Myers. In one of the most sickening and unsettling opening scenes in cinematic history, six-year-old Michael, dressed as a clown, murders his teenage sister on Halloween night. The first scene alone sets the tone for the entire movie, as fifteen years later Michael escapes from his asylum and begins a murder spree while stalking high school babysitter Laurie Strode (Curtis). The true terror of this film comes from Michael Myers, as he is a psychotic and sporadic killer who creates a general atmosphere of insecurity and dread while supplying an unprecedented amount of shocking jump scares. Nightmares guaranteed, Halloween is one true way to get a Halloween trick you’ll never, ever, ever forget.

Less of a slasher and more of a psychological thriller, “Children of the Corn,” based off of the Stephen King novel of same name, is the most disturbing on the list. The film centers on a group of children, around the age of our dear lower school classmates, who ritually murder all of the adults in their village in order to have a good harvest. Driven by a religious entity known as “he who walks behind the rows,” the opening scene chillingly depicts the initial murder of all of the town’s adults. The cult is led by the stone-cold prophet Isaac, who strongly resembles John Michaud ‘20. Three years pass and an unfortunate couple, played by Peter Horton and Lina Hamilton, get stuck in the town while traveling crosscountry. Conflict follows as they fight for their lives while assisting two children who desperately want to escape the cult. The creep factor comes from all of the murderous child members of the death-cult, harrowingly played by talented young actors. You’ll never see those second formers in quite the same way.

Recently, “The Nightmare Before Christmas” was officially confirmed as a Halloween movie rather than a Christmas movie. So I am officially entitled to put the Claymation masterpiece on this list. Produced by the infamous Tim Burton, Nightmare is a charmingly macabre film that captures and intertwines the essence of both Halloween and Christmas.

The film stars Chris Sarandon and Danny Elfman, who is also the director, as Mr. Skellington: The Pumpkin King of Halloween Town. Mr. Skellington, bored with his annual job of organizing Halloween, accidentally connects the Halloween world with Christmas Town. He immediately thinks that he is suited to rule over Christmas Town and places himself in charge of organizing Christmas. The film is gorgeously rendered, with over 227 different clay puppets and over 400 emotionfaces for Mr. Skellington. Along with that, the film has comedy, romance, and just the right amount of spookiness. It was always meant to be a Halloween movie, after all.

If you’re looking for a balance between trick and treat, look no further than “ATM:” my personal Halloween favorite. It stars Alice Eve, Josh Peck (yes, that Josh Peck), and Brian Geraghty as three coworkers trapped inside an ATM with a murderous, unspoken hooded man blocking their exit from the outside. With the stupid premise established, let me tell you why this movie is so darn special to me. The dialogue is cheesy and laughable, and watching Josh Peck act outside of “Drake & Josh” is absolutely hilarious. The three coworkers quarrel amongst themselves with a love triangle delightfully complicating the situation.

Despite this, the hooded man injects a good amount of terror and helplessness into the film as he traps and toys with the inhabitants of the ATM. There are some silly plot twists, but the final scene will probably make you stay up for at least one night. “ATM” strikes one of those perfect balances between horror and comedy. Plus, there’s Josh Peck. Treat and trick.