Political Discrimination at Groton is Rampant and Dangerous 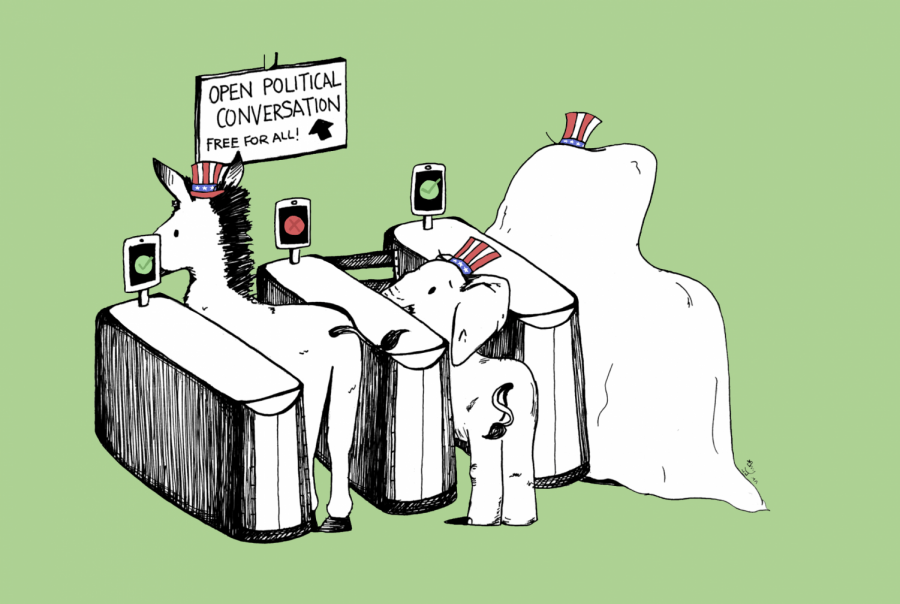 (Discrimination is defined here as significant and negative differential treatment of individuals solely on the basis of an identity group.)

On campus, politically motivated ideological discrimination is real, and we need to tackle it the same way that we tackle other forms of intolerance. You may disagree with me — I find that most people do, but I’m going to try my best to convince you that political discrimination is not only a serious and pervasive problem, but addressing it is vital to combatting racism, sexism, and other systemic social issues.

To prove that discrimination between disagreeing parties exist, I’d first have to prove that there is unfair prejudice between ideological groups. To do this, I picked a random group of 10 students from each form. I asked the pro-choice students what words they associated with being both pro-life and pro-choice. Then, I did the same thing with pro-life students.

Anti-abortion students generally associated the “right to life” with their position, suggesting that the rights of the fetus are their primary concern. Pro-choice students, by and large, never mentioned the right to life as something they associate with being pro-life. Instead, pro-choice students most commonly wrote words like: “misogynistic”, “controlling”, “inconsiderate”, and “naive” — one person even put “racism”. Similarly, pro-life students sometimes, though far less often, failed to associate women’s rights with being pro-choice, describing the position as “radical” and “blindly idealistic”.

These students prescribed negative and hateful associations upon the other side instead of recognizing the more popular and rational motivations of those who disagree with them. After all, pro-life students probably don’t oppose abortion because they want to control women or because they are misogynistic. Pro-choice students, similarly, are also probably not delusional or simple-minded. If people were to falsely associate your religion, sexual identity, or even your group of friends with such derogatory traits (misogyny, oppressiveness, stupidity), this would clearly be unfair prejudice. The same should hold for political ideas.

We’ve proven the presence of unfair prejudice based on political ideas, but proving the existence of discrimination (as we tend to understand the word) is a bit more complicated. Leah Pothel the Opinions Editor, for example, expressed one concern while editing the first draft of this article. “People disagree with conservative students … [but] Black student accounts of discrimination … are far more overt and severe.”

The severity of prejudice is important, but it’s not the only factor that qualifies something as discrimination. For one, although it’s less severe, I’d argue that political prejudice is more prevalent than even racism, sexism, and LGBTQ discrimation on Groton’s campus. While a not insignificant amount of people at Groton may be racist or sexist, I’d argue that every single person discriminates based on ideologies. Even if you are one of the few who had a better understanding of the other side of the abortion debate, what are the odds that you are a part of the small minority that doesn’t possess unfair prejudices on every single controversial issue? At some point or another, we all exercise some sort of political discrimination. Furthermore, we generally don’t condemn instances of political prejudice as quickly or as vigorously as we do for transgressions based on race or gender.

Ideological discrimination isn’t exactly light in severity either. It doesn’t seem like a stretch to say that it’s harder to socialize with others if they associate you with severely negative traits. The truth is that most people in underrepresented ideological groups know this. For example, conservative students are often pressured into suppressing their views due to fear of social backlash. We can test this with a process as simple as scrolling through our Instagram stories. According to the Circle Voice 10th Issue Survey, Groton is currently 20% Republican, so if opinion repression was not happening, you would expect to find that 1 in 5 politically leaning stories posted by current Groton students would lean right. That’s usually not the case, and you can go see for yourself. However, when given an opportunity to speak anonymously, those with right-leaning or conservative views were more active. @GrotonOpinions, an Instagram account followed by 408 current students and recent alumni, conducts surveys and discussion questions, allowing people to answer both as signed-in users and anonymously through Tellonym. “People seem more willing to share their liberal views publicly (in the comments and by directly responding to discussion questions on Instagram),” an anonymous moderator of the account wrote, “while right-leaning views are almost exclusively submitted anonymously.”

Some people raise a different concern from severity. As the one editor said upon the first reading of my article, “To me, [the word discrimination] … is typically applied to aspects of an individual’s identity that are not choices: race, gender, sexuality, ability.” For starters, what we believe is not exactly a choice — you can’t flip a switch and magically believe something else. In fact, one could argue that religion is just a very strong belief, and we would never suggest that people of persecuted religions should just believe something else. The real choice is whether or not to conceal or be ashamed of your belief. And although the presence of choice is certainly important, it shouldn’t be grounds for dismissing instances of targeted prejudice. As a school, we shouldn’t want nor expect students to conceal how they feel. Just as we shouldn’t demand students to hide their sexuality or gender identity.

Our community is drenched in political prejudice, and this prejudice is strong enough to keep large portions of the student population from feeling safe enough to express their opinions. Surely, this qualifies as discrimination.

So, if we can agree that ideological discrimination exists, we can talk more about the importance of conversation. Beyond the obvious social harms of prejudice, there are other pressing reasons. One such reason is that addressing the malice we hold towards our opposition is key to fighting other types of discrimination. For example, even if everyone reads everything on @blackatgroton, we wouldn’t expect to see instances of racism that have been revealed publically to just stop. The deeper systemic issues of race, gender, sexuality, etc can only be addressed through nuanced conversation. But we can’t reach those levels of discussion unless we make sure everyone is comfortable with open communication. And unless we work on becoming less judgemental about opinions, we won’t ever have an environment where that’s possible.