Athlete of the Issue: Mary Collins 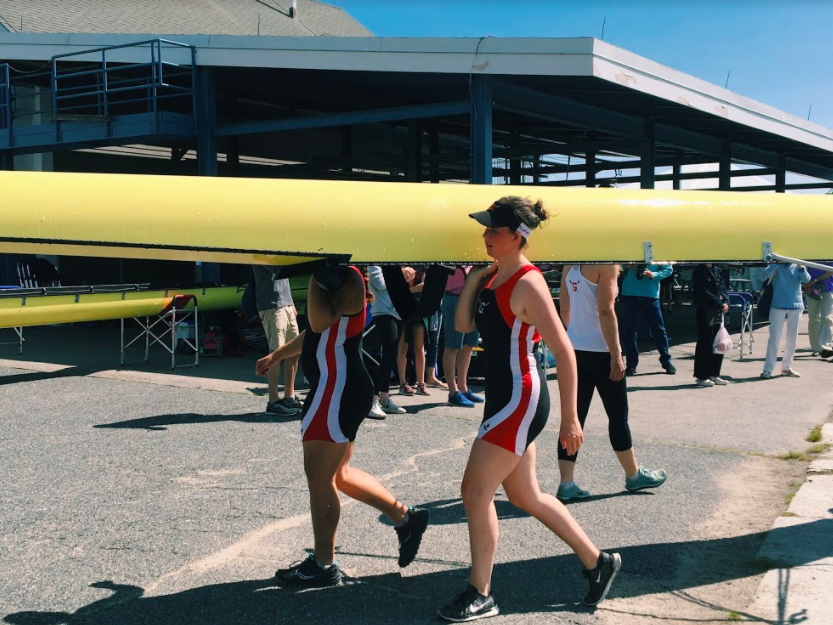 Captain Mary Collins ’20 is most recognizable by her gait as she saunters across the slick, shiny court. She stops at the free-throw line, eyeing the basket. All eyes watch her as she takes her final breath. With precise force, she launches the ball, which cleanly whooshes into the net. Cheers echo through the gym.

Mary just finished her last season of girls varsity basketball and, although her crew season was upended by COVID-19, she remains active at home in Cutchogue, Long Island.

What were the highlights of your last basketball season?

One of the best highlights of this past season would be winning the first-round playoff game. It was the first time we played the four quarters (four 10-minute rounds rather than two 20-minute rounds) as a team, not caring about our own individual stats.

Also, my last St. Mark’s Day was extremely memorable. I cried a lot. In my fourth and fifth form seasons, we won by buzzer beaters. This year, we did even better, beating them 58-25.

This year’s team was the closest I have been on in my five years at Groton. Because of our camaraderie, the highlights of the season included celebrating each other, like Rachel McMenemy ’20’s 1,000 points commemoration.

When did you start playing basketball and crew? What about these sports kept you playing?

I first started playing basketball when I was five. My brother had been playing for a few years and I followed in his footsteps. I played other sports on the side growing up, but I always stuck with basketball because I loved the team dynamic that the sport promoted, which was also carried throughout my Groton career.

I started crew in second form in the very last boat. At that time, it wasn’t about winning, but about having fun. As I moved up boats, I only got closer to the girls on the team and developed an exciting, competitive edge.

When someone says “Groton crew,” what’s the first thing that comes to mind?

When I think of Groton Crew I automatically think of the Nash and all the time I’ve spent there since I started rowing in second form. I think the sense of teamwork is the most important thing about the sport. Everyone has to play their part or we literally would not get anywhere.

You must miss being out on the water, but what do you miss the most? How are you trying to recreate some of the things you cherish from crew season?

If there’s anything I miss the most about being out on the water, it’s being in the boat with my teammates. We have a group chat with the team and we share different workouts we’ve been doing.

I’ve started running a lot, which is not my favorite thing to do but keeps me active and occupied. I’ve also built a little home gym in my dad’s studio. Doing the things I enjoy, like FaceTiming my friends, reading, and watching movies, has kept me sane this past month.

What have been the biggest challenges in your sports career thus far and how did you manage them?

One challenge would definitely be learning how to lead a big group of girls, especially when I’m not out on the court at all times. I learned that communication on and off the court is the best way for the team to remain cohesive.

Is there a particular motto or saying that you live by in tournaments and games?

Really just have fun. If I remind myself of that my nerves often subside.

How have you dealt with the fact that you’ll be leaving high school sports and moving on? What are you hoping to do in college?

It’s definitely sad. Luke Beckstein’s Chapel Talk expressed it perfectly. But Groton sports will always be amazing to look back on. It’s particularly sad that my crew season was cut and our championship was canceled due to COVID-19. However, I ended on a pretty high note last year finishing fourth in New England in a team boat, so that’s definitely a plus.

I’m definitely planning on playing club basketball in college for fun, and I’m always interested in trying new things that keep me active.

Crew is a famously demanding sport; it takes a lot of grit to survive, let alone thrive as you’ve done, on a boat. What is your number one motivation to excel at sports?

I’ve always had that competitive edge that’s needed to push myself in any particular sport, but I always think that bettering yourself, whether that’s in sports or not, is incredibly inspiring. When my teammates and I are all striving for a common goal, it makes me focus and I know that I have to do my part, whatever that might be, if I want us to win.

What lessons have you learned from leading sports teams?

I think being on sports teams has been the thing that’s taught me the most about life. I learned about determination, teamwork, communication, and stress/anxiety management. It sounds cheesy, but I definitely wouldn’t be the person I am today without team sports.