We Can’t Let the Culprit Become the Hero

The Party is to Blame 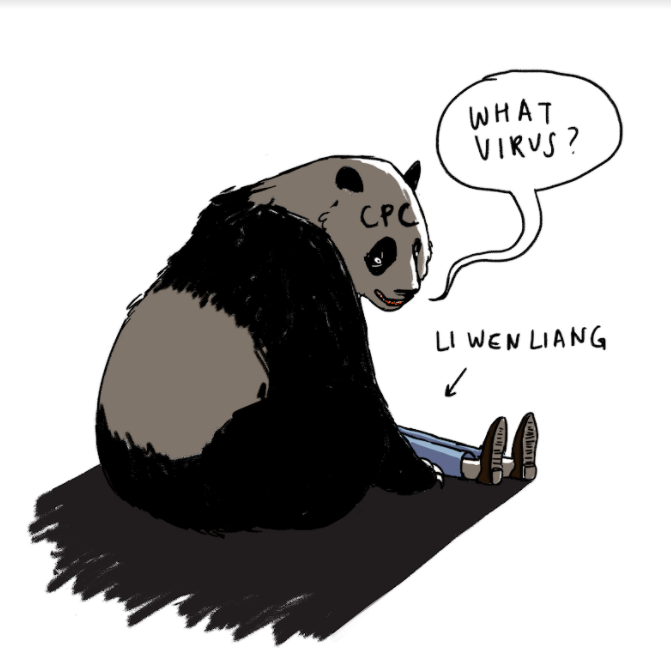 As of April 28, COVID-19 has infected more than 2.9 million people across the world and claimed over 205,000 lives. This deadly pandemic — which has ravaged the global economy, locked billions of people in their homes, and necessitated a war-like response from the government and the private sector — has chaotically changed the way we live.

So, where does the blame for this ongoing crisis lie? Ultimately, the COVID-19 pandemic evolved from the lies and inaction of the Communist Party of China (CPC).

The CPC is rewriting the coronavirus narrative to avoid the culpability that they deserve. For one, according to US intelligence reports, CPC leaders are lying about China’s own infection count. Moreover, the Chinese government has gained worldwide influence by offering medical equipment to struggling countries. While their intentions may seem altruistic, their equipment has often been defective.

To maintain the truth about COVID-19 and to blunt the CPC’s soft power initiative, the United States must condemn the party for its tactical negligence, demand change within the World Health Organization (WHO), and become the clear leader of the international response.

Last December, the fight against COVID-19 began in Wuhan, China. Li Wenliang — a physician at the Wuhan Central Hospital — attempted to notify the public about the potency of the virus, but from the beginning, his efforts were curtailed by the CPC. Instead of regarding Dr. Wenliang as a hero in the fight against COVID-19, the Chinese government treated him like a criminal.

Tragically, Li Wenliang succumbed to the virus he fought to contain on February 7 — just over a week after he was diagnosed. He died a martyr in his own hospital, but before he passed, he uploaded on Weibo the letter that the CPC officials had forced him to sign. Translated, the statement read: “We solemnly warn you: If you keep being stubborn, with such impertinence, and continue this illegal activity, you will be brought to justice — is that understood?”

By censoring online reports about the virus and dismissing Wenliang’s warnings, the CPC gave COVID-19 time to spread and the Chinese people a false sense of security. Furthermore, Wuhan wasn’t placed on lockdown until January 23, and the mayor of the city, Zhou Xinwang, estimates that five million residents left prior to the implementation of travel restrictions for the Lunar New Year.

The Chinese government ignored the threat of exponential growth until it was too late, and to save face, they have continued to lie about their coronavirus statistics. According to Bloomberg News, in a classified report to the White House, US intelligence officials confirmed that China’s COVID-19 numbers have been “intentionally incomplete.” Both Caixin Global, a Beijing-based media group, and Radio Free Asia, a US broadcasting company, have brought attention to the mass shipments of urns to Wuhan funeral homes and the non-stop operation of incinerators in the Hubei province.

This suggests that the CPC has been falsifying data to deceive the public. Now, Beijing is taking another step to camouflage its failures by sending medical advisors and support to regions around the world. While Chinese aid has helped many affected by the pandemic, the CPC is also using its Samaritan efforts as a propaganda tool.

Xi Jinping, the General Secretary of the CPC, and his party have been depicting China as the world leader in the fight against COVID-19. The Chinese have delivered medics, masks, and ventilators to Italy, Serbia, and other struggling countries. At the same time, however, the CPC was sending defective testing kits and faulty face masks to Slovakia, Turkey, the Czech Republic, Spain, the UK, the Netherlands, and Australia, as reported by The Los Angeles Times. Nevertheless, China is answering the world’s cries for help with a much-needed humanitarian effort and developing Xi’s envisioned  “health silk road.”

In the words of Rush Doshi, the director of the China Strategy Initiative at the Brookings Institute, “On the global stage, [China is] hoping to fill the void of US Leadership.” While the United States has pledged over $274 million in aid to the international community, the nation itself struggles to fight the virus at home and now reports the highest number of infected citizens. Despite spending more per capita on healthcare than any other country, the American government was unprepared for a pandemic and hesitant to take rapid, federal action that could have been critical in stopping or slowing the domestic spread. Consequently, China is gaining influence on the international stage. If the headlines remain constant, the CPC has the potential to rewrite the COVID-19 disaster and escape the blame that they deserve for this global crisis.

In England, Boris Johnson’s government is “furious” with China and has promised a “reckoning” for the CPC’s “disinformation campaign,” several officials told Daily Mail. Senators Tom Cotton of Arkansas, Josh Hawley of Missouri, and other American politicians have publicly expressed similar sentiments. So, the question remains: what might that “reckoning” look like, and how should authoritarian China pay for the crisis it has caused? How can other countries get the CPC to even acknowledge their own disinformation campaign?

Unfortunately, the answer is that they won’t: any diplomatic offensive to get China to admit to its faults will fail. Hence, America needs to stand up to the CPC by using its geopolitical and economic strength.

The US government should reassess China’s place in the World Health Organization. In January, Tedros Ghebreyesus, the director-general of the WHO, parroted the CPC’s claim that there was no “clear evidence of human-to-human transmission,” which cost the world valuable time. He has also praised the CPC for their “openness to share information.”

Meanwhile, the WHO refuses to give membership status to Taiwan because of the CPC; the party maintains that Taiwan is a province of China and that it cannot be a member. Even though the US government gives ten times as much money to the WHO as China, the CPC has its fingers in the organization. As a result, the current administration has frozen funds to the WHO for the next 60-90 days.

However, the WHO is not a lost cause. Before halting funds, the United States should have demanded a change in WHO leadership and more transparency from China. America can highlight the CPC’s faults by putting pressure on China through the global health community.

Furthermore, the ultimate priority for the US government should be the prevention of any future pandemic events and the health of American citizens. In the long term, America needs to strengthen the power of the CDC (Centers for Disease Control and Prevention) and lessen its dependence upon Chinese medical products. As Senator Ed Markey of Massachusetts puts it, “We need to make sure that the United States has a medical supply chain that is not reliant upon China or other foreign suppliers.” With a stronger system at home and abroad, the US could both leverage its international influence against the CPC and protect the world from future outbreaks

The COVID-19 pandemic, the worst global catastrophe since World War Two, will take years to recover from. Going forward, China has to be more transparent and forthcoming when it comes to global health. The CPC must be held accountable for their fundamental role in the spread of coronavirus.