Jazz at the Hard Rock Cafe 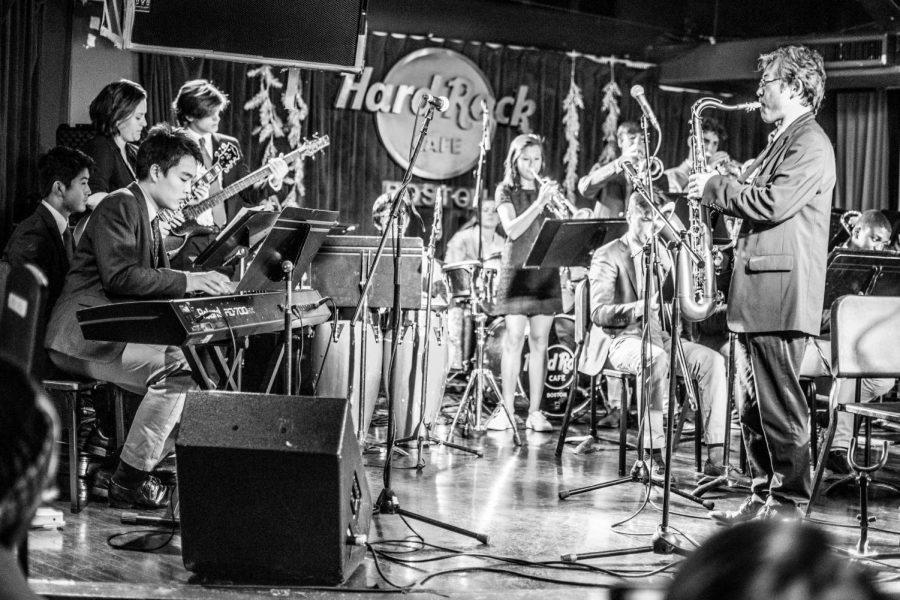 Covered in neon lights and rock’ n’ roll memorabilia, the Hard Rock Café and its high energy vibe make it an amazing venue for live music. On January 26 Soul Sauce (the Groton School Jazz Band) took their musical talents to the Hard Rock Café in downtown Boston to perform a live gig –– a first for many students.

Pianist Larry Li ’23 described his mixed emotions, being both “nervous and excited” and ready to “develop his musicianship” in a different environment than he is traditionally used to.

In a sense, this is exactly what Jazz Band Director Kenji Kikuchi wants: an opportunity for his students to perform in a professional venue.

Jazz Prefect Josh Guo ’20 agreed, explaining how this event essentially is a “glimpse into the life of a real-life musician.”

The crowd was a “mix between Groton parents and random strangers passing by” that contributed to a “great, supportive atmosphere,” according to Josh. Jazz Prefect Henry Kuck ’20 also reminisced about how cut-out signs with encouraging and sweet messages were presented to players after the performance. As graduating seniors, both Josh and Henry wanted “to go out with a bang.”

Meanwhile, for singer and songwriter Jane Park ’21, the trip to the café was an opportunity to listen to her own composition “come alive for the first time” before a live audience.

Jane was a guest singer and sang a song she wrote herself called “It’s a Trap.” As Jane used various Jazz chord progressions in her original composition, Kenji rearranged the piece to be performed with the Riverside jazz combo while still being able to maintain the basic artistic integrity behind the composition. Other than Jane, three other guest singers were also featured: Andrej Klema ’21, Creed Bellamy ’22, and Neha Agarwal ’20. Roshan Palakkal ’21 also joined the band to play Benny Goodwin’s iconic clarinet solo in “Sing, Sing, Sing,” and Brian Xiao ’19 swapped his old alto for a baritone saxophone, rejoining the band for the evening.

Coming out of a fun and colorful Winter Pops concert, the Jazz Band hoped to continue their success. The repertoire for this year’s Hard Rock concert comprised of a plethora of songs that are very different from previous years, from jazz classics like Benny Goodwin’s “Sing, Sing, Sing” to modern pop songs like “Valerie” by Amy Winehouse. The concert concluded with “The Chicken” by Alfred James Ellis: a fifteen-minute long piece where every band member got to solo and a highlight of the night for many players.

“My favorite moment was when everyone in the band got to solo in our final song… It was an amazing moment for players who may not be as comfortable with soloing to show off their improvements and talents,” said Josh.

After the two-and-a-half hour long concert, Soul Sauce reflected on the evening.

When rating the band’s performance, trombone player Ben Jones ’22 said, on a scale of one to ten, “I think an eight is appropriate. I feel like we as the band were a bit rowdy… Camaraderie is important and all but I feel like we let ourselves go in some situations. On the whole, a great performance.”

Guitarist Anna Pimentel ’21 agreed, saying she’d rate the night an “eight because it was a lot of fun, but there were some mistakes as always… but overall a 10/10 for fun.”

Meanwhile, Henry and Josh were both sentimental about their final Hard Rock performance.

“It was a little weird when we got to the last song. I looked over at Josh and we were both a little shook, but it was a great performance and I’m happy to end on it,” said Henry.

“The past five years playing with the Jazz Band… have been some of [my] greatest times at Groton, and I’m going to miss all the memories I’ve made,” Josh added. But, despite his bittersweet feelings, Josh is “so excited for all the young talent we have, and the strides they’re going to make individually and as a band. I can’t wait to see all their growth this year, and for the years to come.”