Athlete of the Issue: Caroline Wilcox 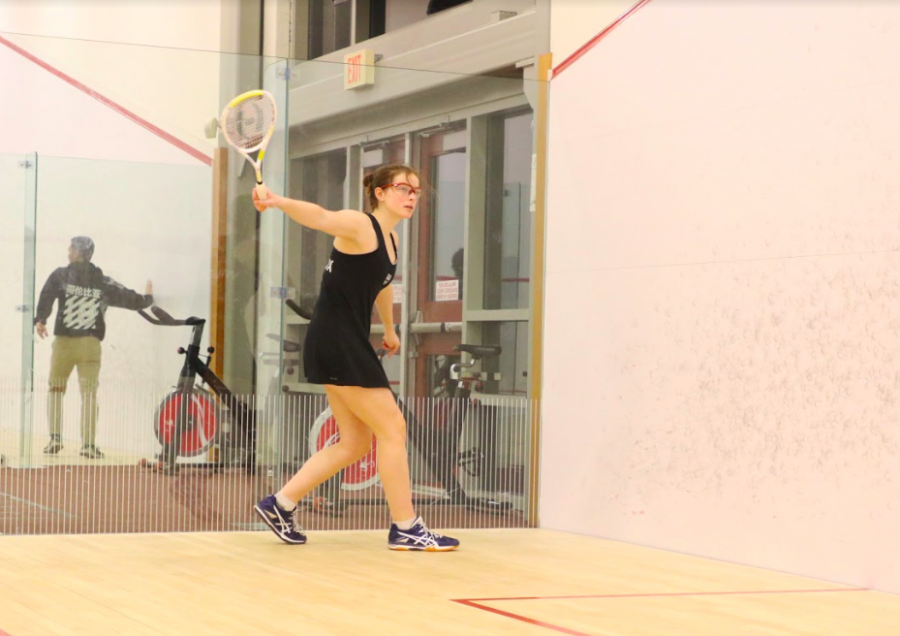 As the ball zipped across the court, she lunged for a powerful hit with her racquet. A deafening silence emptied the room as her clean cross-court died in the back left corner, leaving her opponent with no time to reach the ball. Applause signified yet another victory for Groton. Caroline Wilcox ’20 left the court sweaty and triumphant after her upset against Winsor School on January 24.

A dedicated player and the captain of girls varsity squash, Caroline led her team to victory at the division three High School Squash Nationals and finished her Groton squash career at New England Nationals this past weekend.

How did it feel to win Nationals?

It was awesome. We won our first two games 6-1, but then faced a team that had beaten us last year (Conestoga High School). They were seeded second and we were seeded third in the tournament. It was super stressful, but we went to the finals. The final against St. Mark’s was tight, too, and also came down to the last game. It was a stressful but awesome end!

When did you first start playing squash?

The first time I hit a squash ball was in fourth grade. I was hanging at a friend’s house, and she happened to play so I went with her. I couldn’t even serve! At the beginning of fifth grade, I started lessons once a week and started going to box leagues, clinics, and tournaments on weekends. I continued that throughout middle school and even played on my school team.

How do you feel about the upcoming New England Nationals?

I’m very excited. Honestly, it’s one of my favorite weekends of the year. Last year the Nationals were in Hartford, and, since we’re doing it again there this year, we’re going to my house on Thursday night. We then play Friday, Saturday, and Sunday. It’s fun, especially for me since it’s at my house and it’s nice to be in a home for once. I’m also looking forward to our team tradition (going to Whole Foods for lunch) because it is solid.

Are you nervous at all for the New England Nationals?

Not really, because the outcome doesn’t really matter. I mean, yeah it’s Nationals. But it’s not that different from playing anytime, anywhere. I’m always excited to play. I just love these weekends because the vibe of them has always been amazing.

What’s the best thing about playing squash at Groton?

Seeing my teammates every day. I mean, I love playing squash, so every day I’m excited to just go hit the ball. But the best thing about playing squash at Groton is that there are always people to laugh with you on court and commiserate about running five sets of sprints or in between drills. I mean,  I’m kind of biased because it is my team, but I do believe we have a unique team dynamic here, especially with our coach. Winter is hard for some people, but our team says winter is the best season because we get to see each other every night. We never feel the same funk that other people do because playing together is so exciting.

Who inspires you the most to give your best during matches?

I get in my own head a lot. I want to win, but sometimes I also feel like I can’t win. A part of me wants to improve and beat people rated higher than I am. But every time I play, I want to work as hard as I can for my teammates. If I lose, that puts more pressure on other people to win, but I putting a point on the scoreboard would make it easier for everyone else. I’m also inspired by our coach, Mike. Mike’s full-time job is coaching, so he’s really experienced –– he was a top squash player in South Africa! He offers a lot to our team and to me as well, specifically. Ask anybody on the team! We love him. It’s just not that he makes us DO things, I know that he does things because he wants the best for us. We want to work hard for him because he’s so dedicated to us.

What is one squash rally you can recall that you’re most proud of?

This winter, when I played Windsor. I was playing a girl who was rated 0.3 higher than I am, which is relatively significant. I didn’t think I was going to win. That first game, I was down 5-0. And then I got a point! The rest of that game was a blur. I was down 9-4, but then I ended up winning the game 11-9. I was like, “whoa. What just happened?” In those points, I guess for every point I felt so in-the-zone. I was on this roll –– it wasn’t exactly like I was focused in on my thoughts. There was this feeling of powering through.

Your time at Groton is coming to a successful end. Is there anything you want to say to present/future Groton squash players?

Go into every match thinking that you can win. A lot of the times, if my opponent is rated higher than I am or I know that a school is good, I think, “Oh well. I’ll probably lose.” While sometimes, the other player is just really good, I think I’ve struggled in some of my matches because I wasn’t confident in myself. Playing the girl at Windsor, I just had this breakthrough. You just need to get into the zone.

My coach in sixth grade said, “Go for every ball. Even if you don’t think you’re going to get it, just go for it.” In my match with Choate Thirds, I literally ran around the entire court, chasing the ball. I didn’t get every single one of them, but I got a lot. And that has stuck with me. Because sometimes, you’ll surprise yourself, and even the other person won’t expect you to. Even if you don’t, going for those balls will get you that much closer next time because you think, “Oh, I was actually pretty close to that ball. Next time, I need to step quicker or put my racket up.” Go for every ball.