Athlete of the Issue: Rachel McMenemy 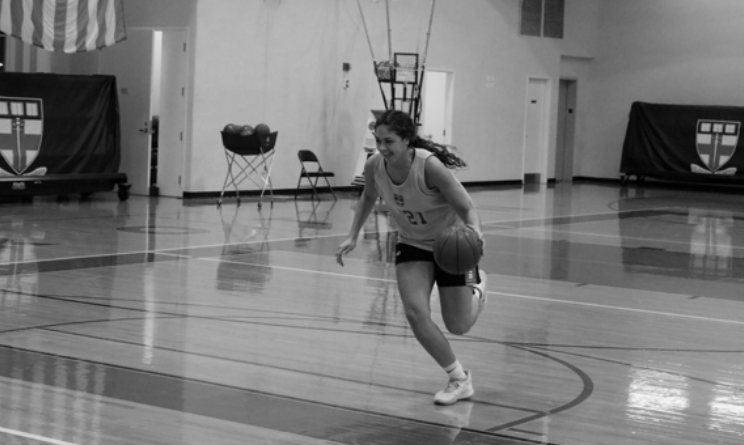 Rachel driving to the basket for a layup, a skill she’s dubbed her specialty.

In Rachel McMenemy’s first season as a zebra, she led the Groton Girls Varsity Basketball team to the NEPSAC Class B finals and brought home the championship. As captain, Rachel continues to lead the team with confidence and passion on and off the court. She contributes her knowledge and skill every day at practice and in games. Now, she hopes to lead the team to the NEPSAC tournament once more to see if they can pull out the championship for the second time.

How long have you been playing basketball?

I have been playing basketball in my driveway with my older sister, Dorian, and my father since I was three years old and started playing on my first organized team in first grade.

Who taught you how to play?

Is your family a “big basketball family”?

I would say my family is a “big basketball family.” My dad played Division II basketball at Webber International College, where his team won the Division II National Championship. My older sister, Dorian, had the chance to play basketball in college at Marist College and the University of Richmond but decided to swim instead, and my two younger sisters as well play the sport.

What position do you play and what is your best quality on the court?

At Groton, I play as a small foward (three position), but with my club team, I play anything from point guard (one position) to small forward. My specialty is driving to the rim and getting layups. Above all, I work hard during games and practices.

What is your favorite basketball memory at Groton?

My favorite memory at Groton is the quarterfinals game against St. Luke’s School. With six minutes left, we were down by six points, and many may have thought it was the end of our season. But the team pulled together and gave it our all, and we made it to the championship game. Winning the championship was the greatest feeling of satisfaction. All year our team had worked hard, and in that moment all our hard work paid off.

To be completely honest, I did not know that I was close to 1000 points until I got on the bus to go to the game. I was really excited to score 1000 points, as it is a great achievement. At our next home game, we did a little celebration on the court and took some photos to commemorate the achievement.

What is your favorite basketball team?

My favorite basketball team is the Boston Celtics.

How is the team looking this season?

Although our record may not show it (7-7 as of February 4), the team is looking promising this season, as my teammates always push themselves and others in practice. The team chemistry is coming along, and in practice, we have been working on passing and reducing turnovers. I am hopeful that we can end the season with a good record.

My favorite part about basketball is the friendships you make along the way and the sense of being a part of something bigger than yourself.

How do you lead the teams you are on?

I lead the teams I’m on by always knowing every person’s role in a play, talking on defense and helping my teammates become better.