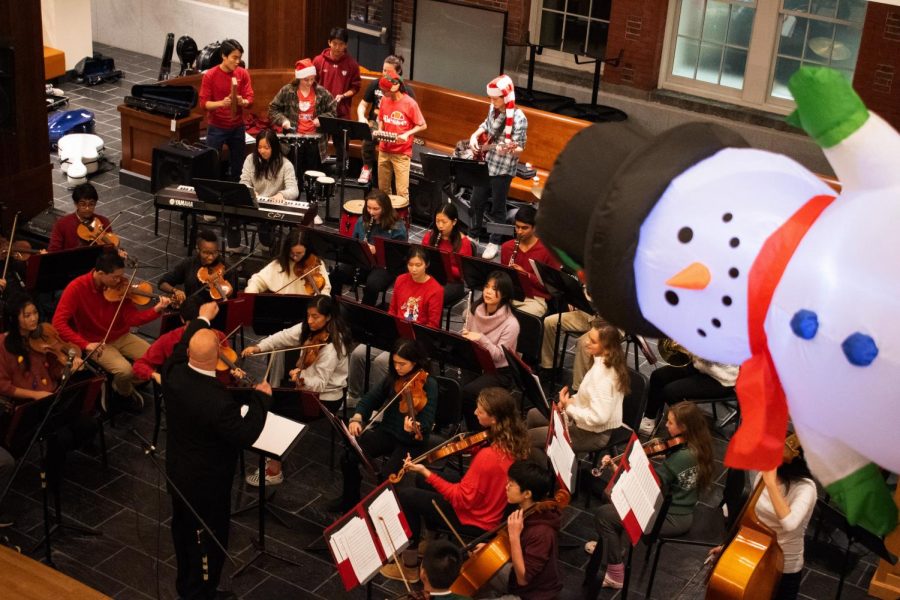 The first snow at Groton not only marks a seasonal shift, but also cues the start of Christmas and the festive vibe that takes over campus. Trees and lights decorate the dorms, and the Christmas classics make their way onto the Spotify playlists.

The holiday season also means a month of rehearsals as various music ensembles prepare for their annual Christmas performances. The Jazz Ensemble, the Chamber Orchestra, and the Gospel Choir all practiced for the Christmas Pops Concert while the Choir readied itself for the three performances of Lessons and Carols.

Kicking off the holiday spirit on December 7 was the Christmas Pops Concert – an uplifting night of jazz, orchestral, choral, and a capella talent.

However, Director of Instrumental Music Mary-Ann Lanier stated that she preferred to call it a “Christmas party with live music” rather than a concert in the traditional sense, emphasizing how the ensembles are not there to showcase their talent but to give Christmas spirit at Groton a musical flair.

Jazz Prefect Josh Guo ’20 explained the musicians are there to simply “get people dancing.”

“It is more interactive,” Ms. Lanier pointed out, noting how the Forum venue feeds into the idea of a “communal” performance.

Kenji Kikuchi, Director of Jazz Ensembles, described Christmas Pops similarly, highlighting the “relaxed” feel of it. He remembered how a member of the Jazz Band once donned a Santa Claus costume for the concert and how one year everyone put on “ugly” Christmas sweaters instead of traditional concert attire (the Maqupellas adopted the latter dress code this year).

The light-hearted songs selected for this year’s repertoire were another defining feature of Christmas Pops. “Angels 13,” a song that Kenji arranged, is a modern spin on the traditional Christmas classic “Angels We Have Heard on High.” In yet another Groton musical tradition, Chamber Orchestra and Jazz Band played “Sleigh Ride” and “This Christmas” together.

To help students follow along with the music better, lyrics were projected on a slideshow. This new sing-along feature added to the notion of a communal performance. Other quintessential Pops features, such as the cookie decorating table or the photo booth, returned.

The week after Christmas Pops, Choir performed Lessons and Carols. A well-established Christmas tradition over the last 91 years, Groton has hosted the longest consecutive Lessons and Carols service in the Americas according to Director of Choral Music Dan Moriarty.

Mr. Moriarty recognizes the rich history of Lessons and Carols and is “honored to be a part of this Groton Christmas tradition.”

For members of the Choir, Lessons and Carols is something to look forward to and has consistently been the high point of the year for many: Elizabeth Girian ’20 relishes the opportunity to “sing really beautiful, festive music for the whole community.”

Gardner Thors ’20 agreed, saying it is “unbelievably exciting and emotional” to sing his “favorite Christmas songs.”

The repertoire, which many singers look forward to performing, includes “Once in Royal David’s City” (a staple of Lessons and Carols) and “Still, Still, Still,” a Barry Rose arrangement piece, specifically composed for the Groton School Choir. The Chamber Orchestra also contributes with its performance of “Fantasia on Greensleeves” by Ralph Vaughan Williams and various other well-known carols in the opening prelude.

Christmas Pops and Lessons and Carols showed two different aspects of Christmas at Groton – an uplifting, casual Christmas defined by its modernity and a Christmas also deeply-rooted in tradition. Both are integral to a classic Groton Christmas.