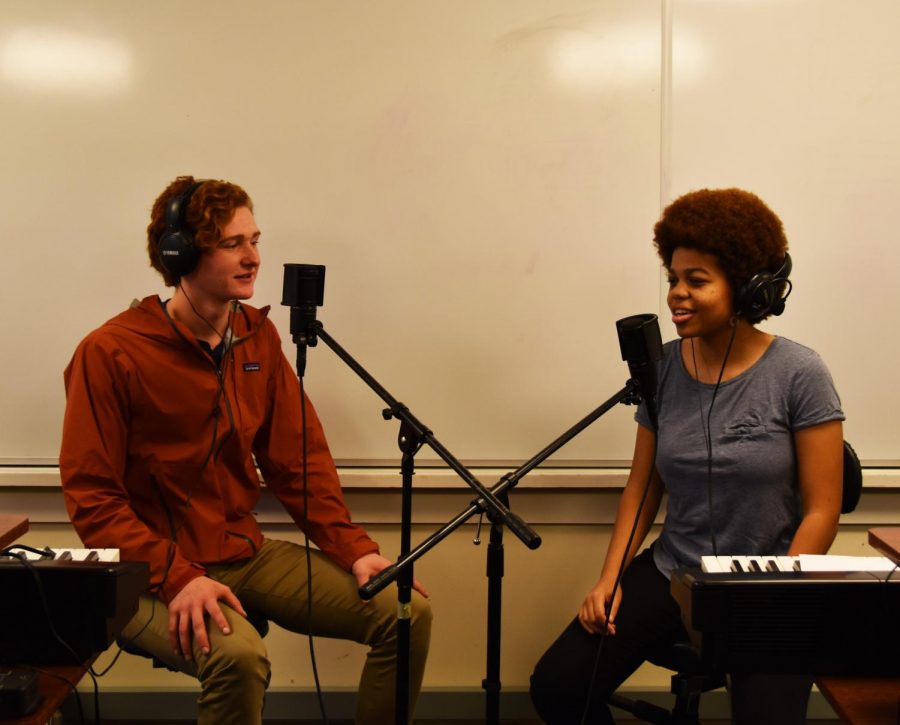 The Daily, the Moth, Radiolab, and Hidden Brain — all well-known podcasts designed to inform listeners about global stories and issues. This fall for their final project, Ethics students created similar podcasts that pertained to a more local environment: Groton. Each student, either alone or in pairs, chose a relevant topic on campus to highlight and then produced a recording incorporating voices around the Circle and their own analysis.

Prior research inspired Dr. Celine Ibrahim to create a learning environment and subsequent assignments that encourage student ownership in their work, which she said not only “empowers the learner” but “engages the instructor.” She decided that “in the case of the Ethics class [at Groton], producing original case simulations, editorials that are printworthy, or podcasts,” would be fitting in meeting her aspirations for her students to “develop their own authentic critical voice” and to communicate their perspectives through a multitude of mediums.

“To me, a vibrant classroom is one where peer networks are strong, where difficult and controversial subjects are regularly raised, and where intellectual risk-taking is encouraged,” Dr. Ibrahim explained.

Students in the class researched a variety of issues on campus, ranging from topics within the classroom to the weekend religious commitment. Harriet Winterer ’21, Cella Wardrop ’21, and Teddy Deng ’20 decided to explore the ethics surrounding teachers’ social and political biases and whether they are “ethically entitled to express those biases in the classroom.”

They began their process by asking the student body through an anonymous survey whether they believed that teachers’ sharing particular biases is acceptable. Following the survey, they interviewed students and teachers one-on-one, transcribed the discussions into a script, and recorded and edited the audio to create their final piece.

In her podcast, Annabel Kocks ‘20 discussed the weekend religious commitments at Groton. She suggested that the commitment forces students to identify with one religion, despite that a student-wide survey released in the Spring of 2019 revealed that approximately 30% of the students identify as atheist or agnostic. “Essentially, the school is not acknowledging the belief systems of a little under a third of the student population by not providing an option for those who are not religious,” Annabel said. “This goes against the school’s value of inclusion.”

At the end of the project, Cella stated, “It gave me a better understanding of the issue and we were self-motivated to put effort into the project. It was a very unique process…and we got to hear multiple sides of the story.”

Dr. Ibrahim wanted her students “to exercise their capacities for emotional as well as cognitive intelligence” in creating their podcast. She further mentioned that the podcast project “prompted us to discuss ethical issues related to journalism and to think carefully about the many interpersonal relationships that we have living in a close-knit community like Groton.”

Students had many concerns about offending participants in the podcast: “Our topic was pretty intense, and I didn’t want to offend teachers…by putting them subject to judgement of their opinions,” Cella stated.

Dr. Ibrahim said that throughout the production process students learned about the “ethical standards for research,” which includes privacy policies and the proper collection and use of information. Cella feels that she now has a better understanding of her topic and how to create a proper recording; she and her group went through consent procedures, learned about cutting clips, and listened to interview recordings for hours before finally compiling the data and opinions into one script.

Due to confidentiality between participants and interviewers, the podcasts will not be released to a wider audience. However, her students thoroughly enjoyed the project, and Dr. Ibrahim plans to continue producing podcasts with her future Ethics classes.