Following a grueling week of Spring exams, the classical musicians of Groton packed their instrument cases from the music wing to set off on the highly anticipated Orchestra Tour. During the month of June, members of the Groton Chamber Orchestra participated in two weeks of musical performance in their tour of Spain.

This year, the tour stopped at three distinct Spanish cities: Madrid, Salamanca, and Seville. The orchestra was able to perform in a variety of concert venues in these cities, but the standout performance of the concerts took place at La Purisma in Salamanca. The church’s amazing acoustics allowed the orchestra’s resonant sound to shine, accompanied by the decorative backdrop of towering pillars and a majestic Italian painting of the Immaculate Conception onstage. The program of orchestral works such as Beethoven’s Coriolan Overture, Mozart’s Die Zauberflöte Overture, and the L’Arlésienne Suite by Bizet was greeted with waves of applause after each last raise of the conductor’s baton. Along with orchestral music, the program also consisted of chamber music with the String Quartet playing Dvořák’s bright, lively American Quartet and Schubert’s emotion-filled Death and the Maiden.

Ms. Lanier, head of music at Groton and chaperone commented on the experience: “The audience members were on the edge of their seats and even a group of cloistered nuns joined and peered from behind their screen to hear and see better!” Señor Fernández, one of Groton’s Spanish teachers who joined to chaperone, described the music as “fizzy, spreading around the church like colorful fireworks.” The performance left a “purisma”, pure, voice in the Salamancan Church.

Along with their concerts, students explored Spain through a cultural lens. From ornamental and historical cathedrals to winding Spanish streets lined with busy shops, the students visited several landmarks and tourist attractions between their performances. They had the opportunity to explore each city, visiting the Royal Palace and the Prado Museum in Madrid, the Old Town and Castille León in Salamanca, La Giralda and the Gardens of the Reales Alcázares in Seville, and they stopped quickly in the small town of Cordoba. “Exploring the Spanish cities with my friends made for a very wholesome trip,” said Iris Wu ‘22, a flautist in the orchestra. “I got to experience Spanish culture up close, rather than just hearing about my friends’ Spainsh classes. I got to learn about the language, etiquette, and schedule of Spain.”

Along with admiring Spain through sightseeing, the orchestra got to meet the people of Spain. The students worked with Spanish musicians, doing a masterclass on Mozart with Miguel Olivares, trumpetist and conductor from the Conservatory of Madrid. “I think the Spanish conductor in Madrid, had people playing with strong commitment and energy,” says Ms. Lanier. Later in Salamanca, they also got the chance to learn about traditional Spanish music and folk instruments with a group of ethnomusicologists. By the end of their trip, the orchestra left with a taste of Spanish culture and music stored in their memory.

After two weeks of intense music and breathtaking Spanish culture, the Groton Chamber Orchestra headed to the Seville Airport to say adiós to a gorgeous country. At the end of the tour, Ms. Lanier said that she “had fun hanging out with a wonderful group of people” and “experiencing Spain for the first time.” The students of Groton’s Chamber Orchestra and supporting faculty boarded their plane to return home for a well-deserved summer holiday. 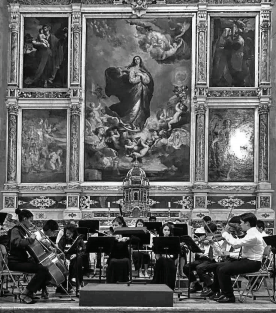