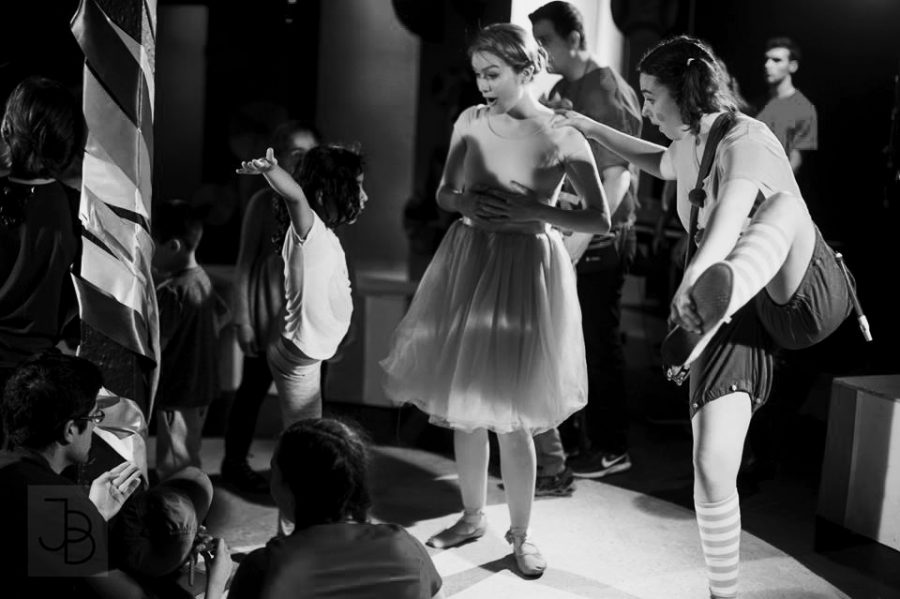 Elizabeth (center) in Under the Big Top

Elizabeth Dickson ’15 was a small girl with big dreams growing up in New Jersey. As a child, she was fortunate enough to go to see Broadway plays such as The Lion King, and “sat in awe” watching the actors perform on stage. Hoping to become an actress herself, she  performed whenever she had the chance, putting on shows for her parents and writing plays or musicals. As her passion for theater developed, she strove to “understand and improve her craft” on a deeper level. Elizabeth is currently a prime talent in one of the country’s best college theater programs, and hoping to pursue a career in the entertainment industry.

While attending Groton, Elizabeth appeared in many productions, including Urinetown, Hairspray, The Miracle Worker, Twelve Angry Jurors, and A Funny Thing Happened on the Way to the Forum. During her four years this resume made her quite the namesake in Groton’s theater community.

Elizabeth’s favorite performance she did at Groton was The Miracle Worker, a drama that tells the story of Annie Sullivan teaching Helen Keller about language. “I specifically connected with Annie Sullivan because my grandmother was a speech therapist,” Elizabeth said. She added that it was her first time portraying a real person on stage, rather than a fictional character. Director of Theater Laurie Sales additionally remembers this as Elizabeth’s best work. “She made you believe you were in a different world. She took her audience on a journey to another time and place, to another emotional reality,” Laurie said.

Not only was Elizabeth known at Groton for her performances in dramas, but she also participated in many comedies and musicals. Whereas Elizabeth came to Groton thinking she was “serious and dramatic,” little did she know that Laurie recognized her many other potential talents: “Her work, even in comedy, was rich and I dare say regal.” Laurie commended Elizabeth for daring “to be boldly hilarious in a social environment that tended to see funny boys as leaders and funny girls as bothersome. She modeled for other girls at Groton that it was okay to own your humor, your quirkiness and your intellect.” In addition to her work in comedies, Elizabeth also participated in several musicals. Although she did not have much experience singing before Groton, she said that she grew to enjoy every musical she’s done.

Elizabeth credits Laurie with giving her confidence and stretching her to explore theater more deeply. Elizabeth herself, however, also had an impact on her peers in the theater. Christian Carson ’18 described how Elizabeth reached out to him in his first show at Groton: “to a new third former in a theater program filled with intimidatingly talented upper schoolers, that was very much appreciated,” he said.

Elizabeth’s love for theater that was encouraged at Groton is still as strong as ever today. She is currently a senior at Northwestern University, ranked the third best college for performing arts in America by Niche.com Inc., a popular college ranking and review site. At Northwestern, a school boasting alumni such as Stephen Colbert, Seth Meyers, and Patricia Neal, Elizabeth continues to thrive in the theater world. Majoring in theater, she is currently studying the Meisner technique, an approach to acting that focuses on behaving instinctively to the surrounding environment. In addition to her classwork, she also continues to act in both plays and films.

This past fall, Elizabeth was in a mainstage production of Jane Eyre where she played Mrs. Reed and Mrs. Fairfax. The play ran three weekends in Northwestern’s Louis Theatre. Groton graduate and Northwestern freshman Michael Senko ’18, who saw Elizabeth in Jane Eyre, described her as “a legitimate star in the Northwestern theater community. Everyone in the program knows her name and the extreme talent she possesses.” This spring, the Northwestern community will get to see Elizabeth shine on the mainstage one final time, playing Hanna Kennedy in Mary Stuart.

Her favorite film she has acted in is Madame Macabre Tells A Terrible Tale About Tongues directed by Tracy Rosenblum. The horror film was Tracy’s senior directing thesis at Northwestern, shot when Elizabeth was a freshman. It premiered at a film festival in Berlin last year and was featured as episode 122 of the World of Death series by Bloody Disgusting, an American horror genre website.

Elizabeth’s achievements in college have inspired some of her former classmates. Lilias Kim ’19 said, “The work I see her do at Northwestern makes wants me to explore new mediums for acting when I get to college as well.”

Elizabeth already has her post-graduation plans set. She will be moving to Los Angeles to work at an agency, and as for her future in the entertainment industry, she “would eventually love to write, produce, and still act.” In reflecting on Elizabeth’s journey, Laurie said it comes as no surprise that her former student has been so successful: “She has always taken to training and direction with a professional attitude and work ethic. And her talent? That is undeniable.”