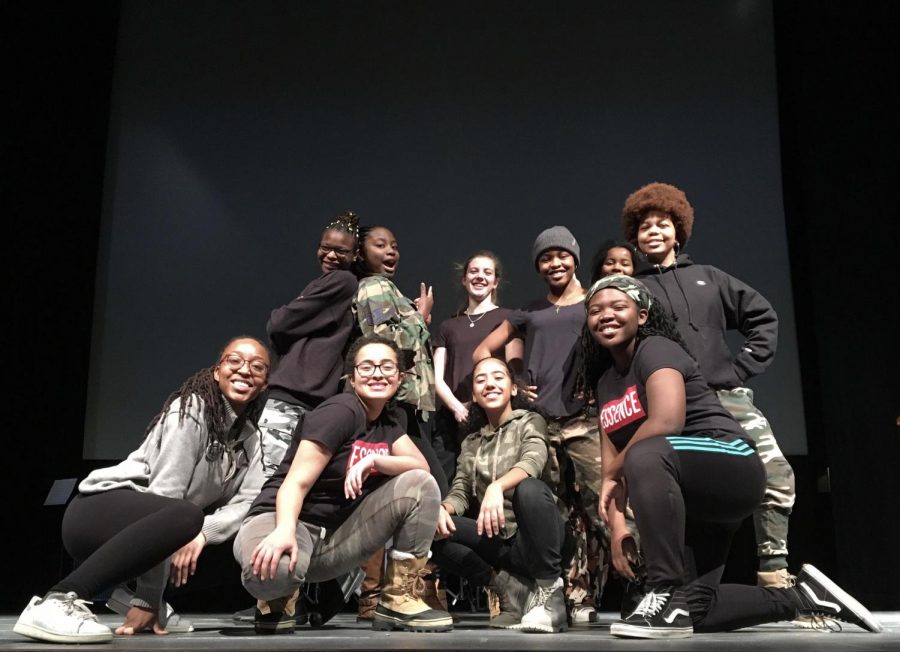 On January 21, Groton School honored the life and legacy of Martin Luther King Jr. through a day designed to foster compassion, diversity in thought, and active discussion on the Circle.

In place of a regular Monday schedule, the national holiday began with three student performances and a keynote speech in the Campbell Performing Arts Center. Essence, the Groton step team, performed to a Beyoncé song. Next, in a piece choreographed by Janice Zhai ‘21, three students danced to a recording of student voices layered on top of the song “All We Do.” The performances finished with an arrangement by Joshua Guo ’20 of “Man in the Mirror,” featuring Groton’s Riverside Jazz Combo and vocalists Caleb Coleman ’20 and Cho Nikoi ’19.

Political activist and professor Rosa Clemente concluded the morning program with a provocative speech that was an amalgamation of her experiences as an Afro-Latina woman from the Bronx, a history lesson covering everything from the trans-Atlantic slave trade to Charlottesville and fascism, and a call for youth activism. Ms. Clemente was the first ever Afro-Latina woman to run for vice president in 2008 on the Green Party ticket; she and her running mate, Cynthia McKinney, are to date the only women of color presidential ticket.

Ms. Clemente called herself a “revolutionary,” advocating for universal healthcare, student debt forgiveness, and more. “It is time for people to not only reclaim their truth; it is time to speak truth to power,” Ms. Clemente implored students. “We all have to become organizers in whatever communities we are in… We have to demand justice.”

Her inherently political speech was met by mixed responses: in an all-student, all-faculty survey administered by Cultural Alliance with 149 responses, the community was split on whether the presentation was beneficial, with 51.7% believing it was and 48.3% believing it wasn’t; similarly, 29.9% categorized the speaker as “poor,” 34.7% as “fair,” 28.6% as “good,” and 6.8% as “excellent.” Many also commented that Ms. Clemente seemed “angry,” or “disorganized.”

Other students, however, found the speech appropriate for MLK Day; for example, Cho, a Cultural Alliance co-head, said, “I’m still conflicted about how I personally feel… but I think the points she brought up were thought-provoking and did exactly what they needed to do: they made us talk… I definitely think too many people got too caught up in… the somewhat ‘radical’ nature of her views, but hearing her perspective provided a great opportunity for understanding a different perspective of life in America.”

Many survey responses echoed Cho’s sentiment; for example, some participants wrote, “I think having our speaker’s voice on campus, although her delivery was unexpected, was a valuable experience” and “though some may have negative reactions to some of what she said, she gave us perspective and good fodder for conversation.” In addition to continuing discussions at lunch and in workshops, many students attended the Q-and-A after the keynote speech, where they asked Ms. Clemente numerous questions on topics such as her views on enacting change without cooperating with the other side. Students “challenged [Ms. Clemente] in really respectful ways,” said Assistant Director of Admission and Director of Inclusion Outreach Carolyn Chica.

Prior to Ms. Clemente’s arrival on campus, some students expressed concern about her presence on campus to MLK Day organizers. However, Ms. Chica said, “It is important on MLK Day that we hear a voice of someone who champions social justice” and that, as a black Puerto-Rican woman, Ms. Clemente’s voice is one not commonly heard on campus. In addition, while Ms. Chica acknowledged much of the criticism, she also said, “It is important to listen to everyone’s voice despite the delivery of their message. Whether someone is soft-spoken or angry, their voice is still valuable.” Ultimately, Ms. Chica agrees with Cho and believes that Clemente’s speech was beneficial as a catalyst for discussion: “I’ve spoken to a lot of students who’ve spoken to their peers about the talk for hours, and that’s a big win.”

The thirty upper-school workshops covered a plethora of relevant topics. Cultural Alliance co-head Eliza Lord ’19 explained that the workshops this year were designed to cover at least one of the “Big Eight” social identifiers: ability, gender, race, religion, sexual orientation, socio-economic status, family structure, and age. Many workshops focused on intersectionality in identity; for example, “Behind the Screens: Minority Representation in Hollywood” tackled media representation for different genders, races, and sexualities, while a screening of I, Tonya was designed to address class, gender, and sexuality as it relates to domestic violence and athletic identity. Others, like “What is Redlining?” and “Mass Incarceration and Family Structure,” were more political, and still others were action-based, like “Common Threads: Weaving through Stories.”

Many students enjoyed the workshops, calling them “well-researched,” “very insightful,” and “fun.” 92% of survey respondents also said that the workshops’ facilitation was “good” or “excellent,” with the majority of responses being “excellent;” only 8% categorized the workshops as “fair” or “poor.” Feedback from the lower-school workshops were more mixed; Ms. Chica noted that, while some lower-schoolers felt more comfortable amongst their formmates, others were itching to join more upper-school workshops, and others still didn’t feel open to sharing.

When asked when preparations for MLK Day 2020 will begin, Ms. Chica smiled and said, “It’s already started. We’ve already started the conversation about who we should bring in [to speak] next year.” She also noted that the MLK Day decision process is informed by student input, inviting any students who are interested in planning the event to join the Cultural Alliance, a club that centers around social justice and identity issues.