Revisiting Trump’s Letter in the Wake of Midterm Elections 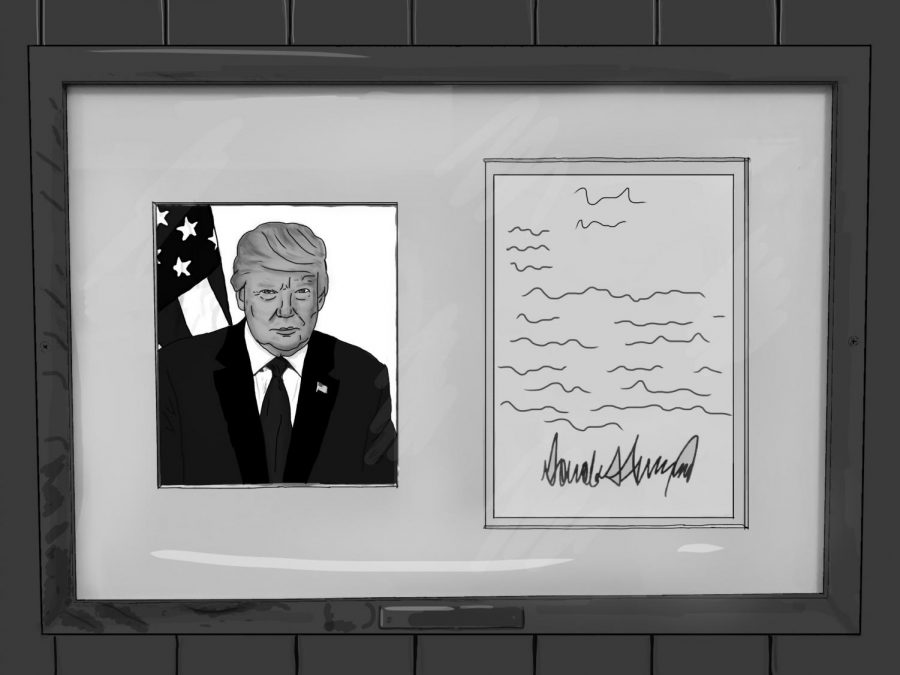 Groton has always had a history of public service.  There is perhaps no greater emblem of that tradition than the letters and portraits from the last nineteen presidents of the United States that line the halls of the History Wing.

Since the election of Donald J. Trump in the fall of 2016, a debate has ensued about whether a letter from the 45th President should hang in the Schoolhouse.  We learned in recent weeks that the letter has arrived although the picture frame has not.  As we await final placement of the letter, the timing is ripe to revisit the underlying issues that have animated a months-long debate.

Endicott Peabody saw public service as part of a larger Groton mission, Cui Servire Est Regnare.  He was close to Teddy Roosevelt and officiated at Franklin Roosevelt’s wedding to Eleanor. Over the decades, Groton alumni have made public service part of their post-university pursuits, with three graduates re-elected this week as members of the House of Representatives: Jim Cooper (D-TN), George Holding (R-NC), and Bobby Scott (D-VA).

However, the environment in which leaders like Cooper, Holding and Scott serve is an increasingly toxic and divisive one.  The nonpartisan Pew Research Center has conducted a survey on political values every year since 1994. In 1994, Pew found the average ideological divide to be 15 points.  In 2018, the gap has more than doubled to 36 points.

At its ugly worst, this division leads to extremism and even violence.  We saw it in the recent pipe bombs mailed to prominent national Democrats, and in the shooting of Republican Rep. Steve Scalise by James Hodgkinson, a left-wing activist, during a practice for a congressional baseball charity event.

While polarization at Groton is nonviolent, the Trump election exposed a stark contrast in opinion within the school community.  Zizi Kendall ’17, then head of the Young Democrats, called first for students to wear black in protest of Trump’s election, then championed a statement of protest to be hung opposite Trump’s letter.  Sully Hamadan ’17 responded to Zizi’s call for a “statement of values” by claiming it was a case of selective outrage, as Groton has portraits of other controversial leaders gracing its walls.

Now, over 700 days since Trump was elected, his letter and portrait are set to be placed in the Schoolhouse.  What are the lessons to be taken away from the debate?

First and foremost, Groton needs to be a place where opinions can be shared and debated. In his famous Four Freedoms speech, FDR called free speech one of the “four essential human freedoms.”  Over Parent’s Weekend, Headmaster Maqubela followed in that tradition by reading the contents of the letter from President Trump aloud.  He didn’t hide the letter in a desk drawer or worry that students would be traumatized by its content (which was entirely appropriate to the office and in keeping with the tradition).  He read it in full.

In addition, Groton must be a place where ideas can be shared independent of where they fall on the political spectrum. As Frederick Douglass said, a failure to hear the thinking of all violates “the rights of the hearer and those of the speaker.”  In the spring of 2017, a survey of Yale University students found “42 percent are ‘not comfortable’ sharing their ideas on politics, race, religion or gender, either in class or on campus.”  Moreover, 76 percent of conservatives “felt intimidated to share [their] ideas, opinions and beliefs in class.” The free exchange of ideas must be bedrock of the Circle.

Finally, as we move from the 2018 midterms to the onset of the 2020 campaign, Groton should continue to fulfill Peabody’s founding belief in the value of public service. On Tuesday, according to the exit polls, 18-to-29-year-olds were 13 percent of the total electorate, up from 11 percent in 2014. They voted Democrat by 37 percentage points, the widest margin of any age demographic.  As the saying goes, “You can either vote by voting or vote by not voting. It’s math.” While the blue wave that was predicted for this election was not recognized in full, with Republicans gaining seats in the Senate and keeping their majority, the mobilization of young voters was a key factor in the Democrats winning back the House. This balance of power in the U.S. legislature suggests that we will see either see more civil discourse across party lines or extreme polarization and demonization of the opposing side. I hope Congress, and  Groton School, choose the former.

When the next presidential letter and portrait arrive at the Schoolhouse and are ready to be placed in the History Wing, let it still be said that Groton is an institution where inclusion spans the ideological spectrum, where all viewpoints are respectfully heard and where students not only have opinions about the political process, but take the time and energy to shape it.