Prefects Have Fun with Dorm Themes 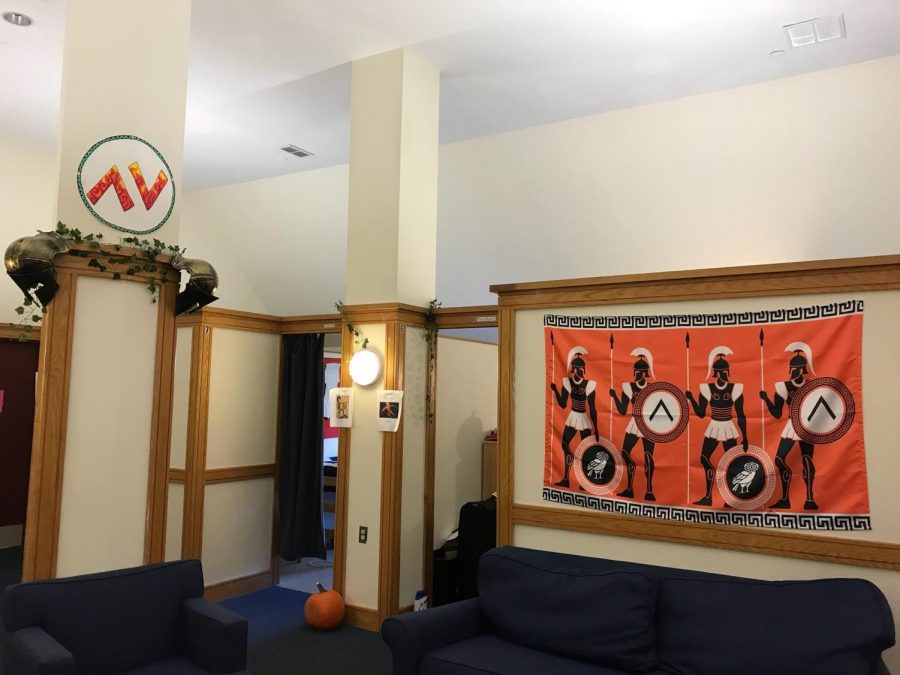 From Greek mythology to carnivals, Groton’s dorm themes this year bring a combination of creativity, humor, and inspiration to the living spaces on the Circle. While some adopt a more serious focus of empowering their residents, others aim to provide a temporary distraction from the notorious Groton grind. Here are some highlights:

The Petroskey’s and Lamarre-Vincent’s prefects decided on a Camp Half-Blood theme, based on the popular Percy Jackson book series. Each resident has been assigned a character from Greek or Roman mythology, as well as a cabin (the Apollo cabin, for example). Julien Alam ‘19, a prefect of LV’s, explained that the second form prefects chose a joint theme to narrow the gender gap and “encourage the vision of a joint form.” The second form prefects chose a theme that would reflect their collective love of the classics, and reasoned that dorm members who hadn’t read the Percy Jackson series could still understand the references to Greek mythology. This theme is also a play on words; Sophie Park ‘19, head prefect of Petroskey’s, thought that “it would be fun to play with the idea of ‘Camp Groton.’”

The third form prefects also used their themes to build a fun and inclusive environment. The “Bold Beautiful Bannards,” as dubbed by the prefect group, have created a theme that will  empower their third formers. They assigned each girl and affiliate an influential woman. For example, Ms. Chica was assigned Frida Kahlo and Mr. Belsky, Lynn Margulis, the renowned biologist. Sandra Redjali ’19 explained their idea, “Mrs. Bannard, being the feminist that she is, motivated us to create a theme that would bring confidence to all the girls and promote a community of women empowering other women.” Across the hall, Spring’s dorm opted for a more light-hearted theme: romantic comedies, or “rom-coms.” Each student is assigned a rom-com, and the rest of the dorm is covered in movie posters and quotes from movies.

In Hundred House, the Hamlin’s prefects selected a carnival-inspired theme. Lily Cratsley ‘19 mentioned that her prefect group chose this theme because “carnivals and circuses remind people of warm weather and fun childhood experiences.” She noted that the prefects hope when the days get colder, the bright colors will ensure that the dorm maintains a lively atmosphere. In addition to the fun decorations on the walls, the prefects plan to hold carnival-themed feeds such as kettle corn and cotton candy, as well as play classic carnival games during check-in.

The Macbride’s prefects chose a similarly fun-focused under-the-sea theme. Katherine Brown ‘19 said that the theme provided them with “the opportunity to come up with a multitude of fish and ocean puns.” For example, the inspirational saying “Any-fin is Possible” is taped on the wall, encouraging the girls with a slice of humor. More importantly, though, the Macbride’s prefects hope that their theme would contribute towards an overall “calming and welcoming atmosphere.” Decorations of fish, seaweed, and other sea-themed items are scattered on common room walls and dorm hallways.

Prefects of Wade’s dorm decided on a theme about professional athletes.  Shane Kim ‘19 explained that the prefect group thought it would be a good idea because “most people have favorite athletes growing up, hence the theme would be more relatable and applicable to all of the kids in [the] dorm.”  Each student was assigned a professional athlete based on their athletic interests; for example, Eric Schiavone, who plays ice hockey, was assigned Nikita Kucherov, a player for the Tampa Bay Lightning in the National Hockey League (NHL).

As we approach the colder months and linger more and more in the warmth of our rooms, the dorm environment becomes increasingly important. Fish puns and kettle corn feeds may seem like little things, but they may be just enough to make our days at Groton.