Athlete of the Issue: Nailah Pierce 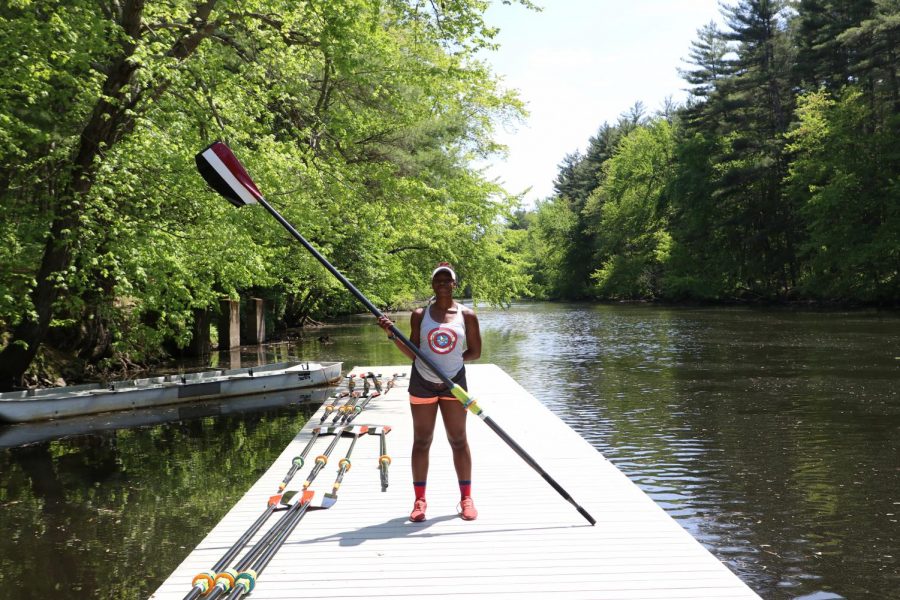 Nailah on the boathouse dock.

“Trusty teammate.” “Fierce leader.” “Phenomenal athlete.” These are the words used by girls varsity crew team members to describe Nailah Pierce ’18. Nailah has been on the team since her first spring at Groton, and over the last four years she has managed to master the sport of rowing. In her words, “[Crew] is a sport that leaves you strong, fulfilled, and connected to your teammates.” Praised by her coach and team alike, Nailah is a critical member of the first boat and one of three captains for the team.

Before coming to Groton, Nailah said she had “never heard of the sport before.” She was introduced to crew her freshman year by Hallie Bereday, who put her in contact with the head coach, Tiffany Doggett. Nailah said she joined the sport because she needed a “place of belonging” her first year at Groton. Furthermore, she said that “all that the team asked of me was that I work hard and come with a good attitude.”

Nailah mentioned that it is difficult for her to explain the sport and her affinity for it to someone who’s never rowed before. To put it simply, she called the feeling of racing a “flow state.” She added, “You are outside the limitations of your own mind, body, and spirit. You are an extension of the other three people, the boat, the current of the water.” While the sport tests her mental limits sometimes, she always perseveres, especially with the help of her coxswain. She concluded, “That is what rowing is like–pushing yourself to the point where you are literally afraid you won’t make it.”

Nailah was extremely humble about her skill in the sport. In fact, she said, “There is nothing special about me that makes me a good rower. I am not different or better than anyone on my team.” She did admit, however, that she made the decision to be her best “every day, no matter what it took” at practices or races.

Nailah is a captain of the team this year, along with Layla Mcdermott ’18 and Olivia Potter ’18. Nailah feels that being a captain of the varsity crew team is markedly different from being the captain of any other team and called it “very scary.” Because the boats are determined by who can row the fastest, nobody’s seat is guaranteed, even the captains’. As Nailah said, “There is no sense of entitlement,” adding that as a captain, she must balance goals of unifying the team while still trying to sustain her role on a high boat—a seemingly contradictory task to undertake. But Nailah said captaining is far from a negative experience, and that each girl on the team “makes [her] the best person [she] can be.” She referred to them as “family,” saying that she chose that word purposefully because while they might argue, they always stick together.

Members of Nailah’s “family” have glowing reviews of her as both a rower and a person. Annie Fey ’20 described Nailah’s “constant energy every practice,” adding that because of this, “she keeps everyone’s spirits up and focused on being stronger next time.” Nailah’s co-captain Olivia believed that “Nailah embodies the idyllic grit, aggression, and patience that all rowers strive to emulate… Her ability to dig deep acts as a fearless example, and when it’s over, you can expect her to crack a joke that has the rest of the boat weak in the hands.”

Finally, Nailah’s coach, Tiffany Doggett, chose to use the word “integral” to describe Nailah. “Her commitment to being her very best everyday inspires the team, especially the other girls on the first boat, on the team and even her coach,” she added.

As for the future, Nailah has committed to row at UMASS Amherst beginning next year. She’ll be moving on from NEIRA’s to this Division 1 team in the Atlantic 10 conference, which will surely be a transition she’s ready for, thanks to her time at Groton.

In her four years of rowing, Nailah has been essential to the girls’ rowing success. She is loved by coaches and teammates, and in the words of Olivia, “Groton is lucky to have her.”